The World Cup of Golf 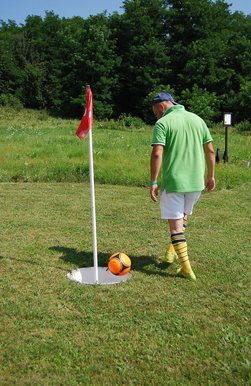 I hate to say we called it but… Well, who am I kidding, I actually love to say we called it. Nearly two years ago, we published a blog on a new trend called FootGolf. It’s pretty self explanatory: you take golf, and replace the golf ball with a soccer ball (or as rest of the world calls it, a “football”), and instead of taking swipes at it with drivers and five irons, punting it down the fairway with your foot.

It seems that, slowly but surely, the game is picking up steam. There is now a “world cup” of FootGolf. And the top seeded team (and host country) in this world cup is arguably one of the world’s best countries at mixing the two sports: Argentina. Appropriately enough, this comes at about the same time as Argentine golfer Fabian Gomez, who originally wanted to be a soccer player, scored a big win in the St. Jude Classic.

This prompted me to check in once again with my son who is living in Buenos Aires. He assures me that Footgolf (or “Futgolf”, in Spanish) is still seen as pretty weird there. But for people in Argentina, who are still a bit sensitive about losing the Falklands war, any chance to beat the English at anything is greeted with great enthusiasm. And in this case, there’s an added bonus for the Argentines: the Brits are the inventors of both soccer (err, “football”) and golf!