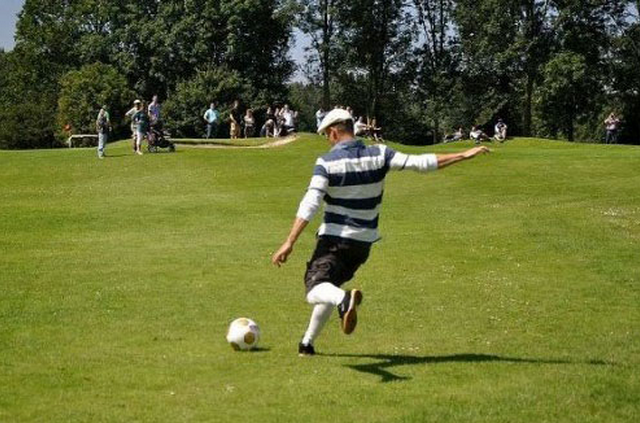 The United Kingdom, from our US-based standpoint, is the source of many fine things, namely our beloved game of golf as well as humor (or humour, if you will) so sophisticated you can`t even get the jokes without having a graduate degree. But the Brits aren’t above a bit of low brow fun that even us dumb yanks can get. They made Benny Hill, after all, and now theres a new craze taking off in England that’s a mix of soccer and golf: FootGolf!

How does this game work? Golfmagic.com has more.

“The Federation for International FootGolf was created in 2012, and there are now 13 official members (including England). FootGolf largely follows the rules of golf, with players kicking a football from the tee and down the fairway before ‘putting’ into the cup in as few shots as possible.”

The game has now been adopted in the US, and though it’s not quite yet as popular as real golf, it does have its fans. Since we at Pause-N-Throw are proponents of accuracy, we’re interested to know how you would go about curing a slice in footgolf. For once, “bending it like Beckham” isn`t such a good thing.