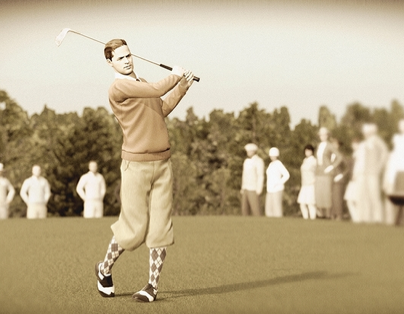 So it’s fair to assume that Wii Golf, a video game featuring stick figure characters made six years ago, won’t exactly be able to convincingly replicate the experience of swinging a golf club. But what about the most up-to-date, photo realistic, physics team tested video game which sets out to give you the most true-to-life experience that a little box with a powerful processor inside could possibly deliver? Tiger Woods PGA Tour 14, to be released on March 26, appears to be just that: awesome graphics, expertly calculated mechanics, and to top it off, you get to play against top pros of today, as well as a new “legends” mode where you get to play against such past icons as Bobby Jones and Arnold Palmer. Not something you get to do every time you play 18 with your beer slurping buddies.

The game isn’t out yet, but there is plenty of buzz about Tiger Woods PGA Tour 14 – most of it in the video gaming community, as actual golfers are more likely to think of “Wii” not as a gaming system but as something you usually have to do on the back nine. Game review site IGN notes the detail with which designers have recreated the play during “legends” mode; balls and clubs were made out of different stuff and reacted differently to the same type of shots. I wonder if historic tournaments also feature the Hindenburg providing aerial coverage instead of Snoopy 2?

But we at Pause-N-Throw are more curious to know if Tiger Woods PGA Tour 14 would recreate the importance of a good backswing while playing the game. Though sites like Nintendo Life might praise the accuracy of the interface, the nature of the Wii controller, as we pointed out earlier, means that you’re never going to really get the feel of swinging a real club – unless you decide to strap the controller to the end of your five iron. Moreover, it’s difficult to say how much even hyperrealistic games such as Tiger Woods PGA Tour 14 can take the position of your wrists into account. These games have to be flexible to alignments at the top of the backswing, since there is no fixed position for which side of the controller correlates to the actual face of the club.

Bottom line: Tiger Woods PGA Tour 14 is probably the closest anyone is going to get to an actual round of golf played on a TV screen. But don’t be surprised if your tournament winning stroke in this video game gets you nowhere on the course. Nevertheless, we’re going to be sure to check this game out this year. We might even wear the Pause-N-Throw while playing!