Obama To Improve His Game 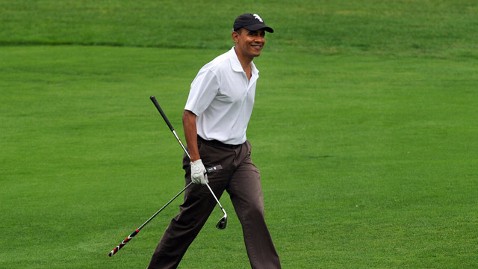 Recently, President Obama made headlines for playing golf with Tiger Woods, and while he took a lot of heat for it in the press (the press corps was upset about the fact that they weren’t allowed in to take photos), Tiger himself was pleased with the president’s playing, especially his short game. He then added, “if the president has time after these next four years to really practice, he could be a pretty good golfer.”

Nevertheless, Obama was left feeling a bit self conscious about his playing, making the decision that he would take a lesson from Butch Harmon, Tiger’s former teacher and teacher to many other golf greats. No word yet as to what Harmon has to say about the specifics of Obama’s game, however he commented that, like all golfers, it’s clear that Obama is trying hard to improve.

Judging from an earlier video of Obama’s swing at a driving range in Hawaii, it looks like there may be a little room for improvement. Changing his stance, for instance, would make a difference. In addition, no one bothered to tell him about the flat wristed position at the top of the backswing. Unfortunately, since he’s a lefty, we can’t yet send him a Pause-N-Throw. But once we have a left handed model, we’ll be happy to send him a free unit as a trial. That is, as long as he agrees to take us off the terrorist watch list in return.