Wii Golf: Realistic Yet Not 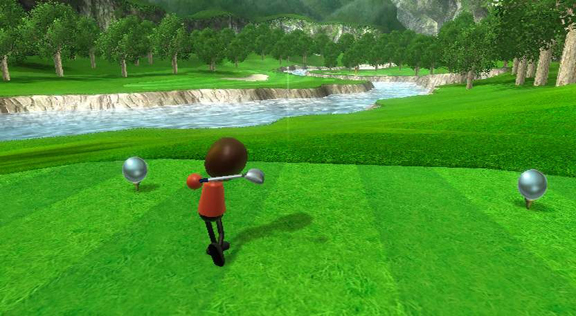 When Nintendo first released the Wii in 2007, one of the first games to be included was Wii Sports, which included golf as one of the playable sports. The innovative new controller made swinging in the game much more similar to the motion made during an actual round of golf. Nonetheless there were many things the game left out. As avid Wii golfers, we’ve become keenly aware of these over the years.

One of the key differences is that the mass of the club head is not replicated at all in the Will controller, even if you opt to attach that dorky looking plastic club head that Nintendo sells. In addition, the shape of the controller is nothing like an actual golf club grip.

But above all, the game doesn’t replicate the effects of an incorrect backswing. Basically, the trajectory of your shot is calculated by the velocity and direction of your controller at the (simulated) point of impact. But the game doesn’t take into account the rotation of the clubhead. Whereas the angle at which the club head addresses the ball in real life golf is essential, Wii golf lets you fudge it a bit. And by a bit, we mean a lot.

A golf swing in real life (or IRL, as the cool kids say) depends on so many factors; we at Pause-N-Throw have built our training aid to help with the wrist position, which is one of the most fundamental parts of the backswing, and one of the keys to great golf. Unfortunately, this aspect has been left out in Wii Golf. But hey, you can’t expect that much from a game where the golfers appear as brightly colored polygons with circles for hands.

To be fair, a long time has passed since Wii Golf first hit the shelves – a new generation of the Wii has been released, and later game titles have had their chance to recreate the golf swing. How accurate are the most modern games? See our next post to find out.