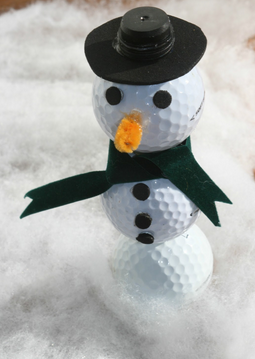 Winter’s here, and as bold, rugged golfers, we tend to head out to the links and pretend the cold weather has no effect on us. But one time, in a far northern clime, a friend of mine claims to have witnessed this attitude taken a bit too far.

He was playing golf on a chilly day with a group on a hole without fences to the right hand side. The fairways were relatively clear of snow but outside the course the snow was piling up. And wouldn’t you know it, one of his friends hit a slice, which bounced off a road and onto someone’s yard. As he walked to the fairway, he could see that after it bounced, it landed right on top of a snowman being maid by an elementary school kid. The kid pulled the ball out and stuck it on as the snowman’s nose. As the golfer huffily dropped a ball, the kid yelled out, “Thanks mister!”

Interestingly enough, the guy took an eight on the hole, a number I’m fond of referring to as a “snowman”.