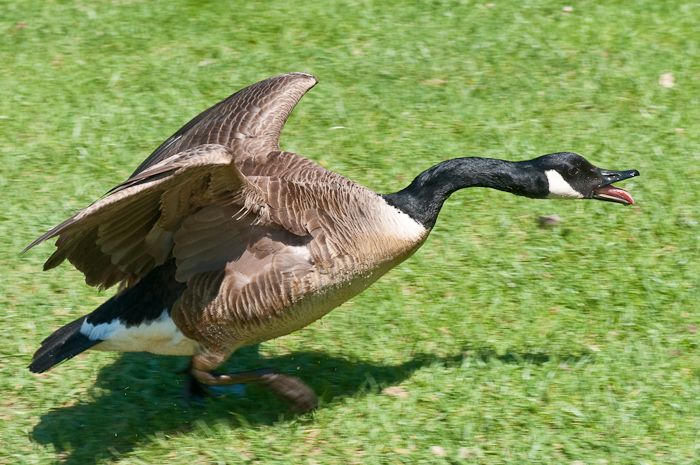 Sometimes, golfers talk about having a duck hook. Well, recently I witnessed something similar that could be called the “goose slice”.

I was playing in a foursome of golfers who had all come alone to the course early – true hard core golfers. Despite their appropriately high level of golfing skill, one of them had a slip up unfortunately timed with avian spring migrations. Oddly enough, it was the most professional looking of the whole bunch who screwed up the worst. This guy was totally no nonsense and well-dressed, I assumed he must have had a day job in the secret service. On the third hole he stepped up to the tee, and hit a drive that sliced behind a tall bed of reeds next to a lake. He authoritatively walked over to find his ball, and the rest of us proceeded to where our shots had landed.

Out of nowhere, an angry chorus of honking erupted. It turns out Mr. Professional’s ball had ended up in the middle of a giant gaggle of geese that had stopped on their way north. They weren’t happy to have this guy poking around them, no matter how nice his shirt was. The whole scene was really quite amusing. The guy managed to avoid getting pecked, or bitten but, needless to say, he ended up having to take a drop. I wonder what his co-workers with the curly ear pieces would have to say about this.