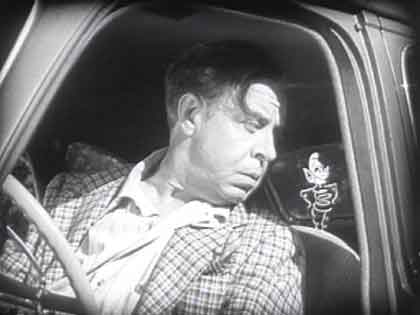 For me and some of my friends and relatives, funny golf videos are a passion. Sure there are the classics: Caddyshack, etc. But there’s one short movie from the 40s, tangentially related to golf, whose cheesiness never ceases to entertain. It’s called “A Case of Spring Fever”. In the 90s it was featured in an episode of “Mystery Science Theater 3000”, do yourself a favor and watch that version.

The plot of the movie goes something like this: A middle aged guy is talked into cancelling a golf game with his buddies because his wife wants him to fix the springs on an ugly couch they have in the living room. Naturally, the guy is frustrated, and as he tries in vain to fix the springs, he lashes out, “Stupid springs, I hope I never see another spring again as long as I live!”

Little does he know by making this wish, he will be summoning up Coily, the magical “spring sprite”, who has the power to make all the springs in the world disappear. He curses the hapless, frumpy, golf-loving protagonist of the film: “So, you never want to see another spring, eh? I’ll fix it so you get that wish!”

At first, our chunky everyman hero is thrilled. This means he can take off and play golf! Then he tries to call his friends on the phone and… he can’t, since there are no springs to operate the dial. Coily seizes this opportunity to appear out of thin air and taunt our hero: “No springs!”

Our hero then attempts to operate a number of spring-dependent house appliances to no avail, each time met with howls of laughter from his magically annoying tormenter, Coily: “No springs, my friend, no springs!” After trying start up his car, which of course is impossible, he finally repents. “Gee, Coily, is there any way I can take back my wish?”

Coily responds: “Well, ok. I’ll do it just this once. But next time be careful! Don’t ever make that wish again!” Coily then proceeds to bring all the springs in the world back into existence. Conveniently for the main character, Coily apparently opts to magically fix the couch springs while he’s at it, leaving him free to play golf with his buddies.

But the joke is on the rest of the foursome. Our hero has now become something of a spring evangelist, insisting that the entire golf game depends on elasticity, and by extension, springs. He even goes as far as to say, “even the ground, the earth is a spring!”

All this spring loving is also good for his golf game, he trounces the rest of his buddies, and as he’s driving them back, he bores them to sleep talking about the springs found in random objects they pass on the way home. One of his fellow golfers, fed up with hearing about the awesomeness of springs, snaps at him: “Stupid springs! I hope I never see another…”

Before he can wish those pesky springs away, our spring loving hero cautions him: “Stop! Don’t say it! Don’t ever make that wish as long as you live!” Coily pops up again to giggle in approval. And thus concludes one of the cheesiest golf short films in history.