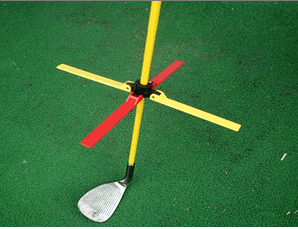 In golf, the slice is probably the most infuriating of accuracy problems golfers can have. After an apparently perfect tee shot, the ball suddenly sabotages your plans for an easy hole by abruptly veering to the right. So it´s no wonder people have put so much effort into curing a slice, sometimes producing items that are a bit, well, odd. Let’s have a look at some of the weirdest slice cures.

First, there’s this story which we covered earlier on our blog. While examining other slice cures from other sites online, we found an incredibly thorough analysis of the many different reasons people slice. But almost inexplicably, the site shows a weird training device composed of a foam swimming float attached to a tripod, suspended over a golf ball. Sure, it makes sense in theory: the float keeps you from swinging your club on the incorrect plane. But you have to admit it looks a bit goofy.

Second up is a tip from a less reputed golf source hubpages.com. The page tells a story of an experiment done during a golf tournament for pro poker players (go figure). Then it explains its miracle slice cure: “You simply apply a thin coat of Vaseline Petroleum Jelly to your club face. That’s all there is to it, instantly your golf slice is cured. The pro demonstrated a few before and after shots and it was quite clear that not only did the golf ball go straight, it traveled an extra thirty yards!” This is actually something that, though it might seem like some snake oil scheme, actually does work sometimes. But who wants to be seen unexplicably carrying a jar of vaseline with them on the links just to cure their slice?

Here’s a fun one. It’s a training aid that looks like a set of helicopter blades. Some people find that their swing is a bit of a chopper, causing a slice. But this helicopter aid really helps your game to take off! It’s perfect for people who like to play back the opening sequence of Apocalypse Now in their minds as they tee off.