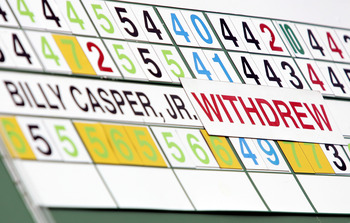 Sometimes, when we’re having a bad round, thinking about the pros can really get us down. “How come it’s so easy for the pros, yet when I play, I always shank it onto the other fairway?” First of all, the pros started when they were still in their cribs and they practice 24/7. But if it’s any consolidation, even the pros aren’t perfect. An interesting compilation of the most epic golf chokes tells the story of how even the greatest golf legends of all time can eat it. Here are some of the highlights.

Arnold Palmer, with 9 holes left in the 1996 US Open, thought it would be a good idea to go for a new tournament record, which had currently been set by Ben Hogan. Instead of setting a record, he blew his seven point lead and lost to Billy Casper. There’s even a plaque at Rancho Park Golf Course where he took a 10!

Fast forward to 2005. The same Billy Casper who had dusted Arnold Palmer was now getting his hind quarters handed to him in the Masters, due to the fact that the 75-year-old had unwisely taken advantage of the tournament’s lifetime invitation to former champions. He performed so badly, he dropped out halfway through the first round.

The compilation goes all the way back to 1938, with Ray Aisley’s infamous attempt to escape from a water hazard without taking a drop, that ended up with him taking a 19 on that hole. It also talks about Greg Norman’s implosion during the masters.

Who takes the number one spot? None other than Phil Mickelson, for his attempt to intentionally slice the ball at the 2006 Masters. Hmm, that one sounds familiar…