What does MOI mean for Golfers? 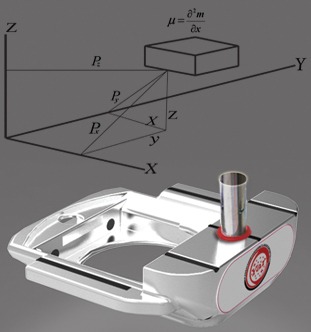 Recently, we wrote about the controversy surrounding the Yar GX-1 putter, which made headlines last month after it was featured in a Grantland article. At Pause-N-Go, we’re interested in the technical side of the game, so the thing that stood out to us most about this article was not any of its personal details but rather its focus on a little understood concept: MOI, or moment of inertia.

At first, it might sound like some bad French pun. Excusez-MOI? A bit of research reveals a seemingly impenetrable series of equations decipherable only by the nerdiest among us. But after a closer read, I was able to figure out the basics.

MOI refers to the natural resistance to any spinning object, calculated according to the axis point around which an object is spinning. Think of it this way. If you pick up two small weights and start spinning, you have a low MOI, but with two heavy weights, your MOI goes up.

Now, many of you are probably thinking, “Okay, so MOI is measured around the axis of spin. But since both the club head and the ball are rotating, which MOI are we looking at?”

Good question. The most significant rotating motion in golf is the swing, and after that, the spin of the ball. But – paradoxically – when golfers talk about MOI, they’re not referring to either of these rotations. They’re referring to the accidental rotation of the clubhead that is generated by the ball’s resistance to being struck. So, when we talk about high MOI clubs, we mean clubs that resist this spin, usually by putting more weight at the edges of the club.

Conventional wisdom holds that a low MOI club is less desirable, because when it strikes the ball, the ball will naturally spin the club backward, causing inaccurate shots. High MOI is a natural resistance to this spin, and helps the club drive through the ball.

This conventional wisdom is what Dr. Vanderbilt railed against in her creatively worded but not always coherent description of the GX-1 putter. At least, that’s how it appears on the surface. But after watching the description closely, I became aware of the fact that, while other clubs measure MOI in terms of the twist of the clubhead, a spokesman for Dr. V in this video appears to be talking about the MOI measured against the actual swinging of the club.

Does your head hurt trying to figure this out? If you don’t understand this, don’t worry, neither do the people pitching the GX-1. Basically, it’s an apples to oranges comparison. So far, the most coherent explanation of MOI I have seen in putting is this one, which used a robot test for a 22 foot putt to prove the effectiveness of high MOI putters.

And if you’re wondering how to use all of this to shoot a lower golf score, here’s our advice. Use the Pause-N-Throw golf swing train to groove an accurate swing – one that puts the sweet spot of the club on the back of the ball. Just finding the sweet spot will give you 10 yards more off the tee. It’s so effective you won’t have to worry about MOI, or trying to figure it out – something your brain will thank you for.