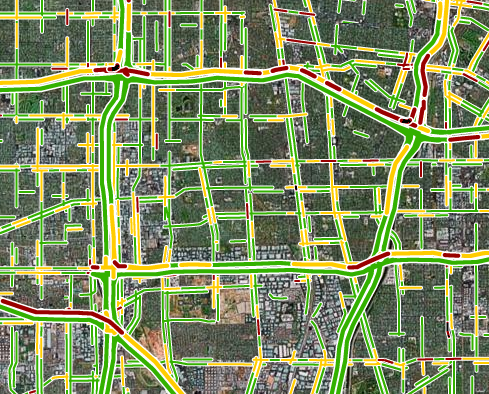 I’ve listened to plenty of traffic reports on the radio over the years, and at times there have been some pretty goofy reasons why traffic has been clogged. Some inconsiderate schmoe decides that his couch just doesn’t work with his new coffee table and it ends up on the expressway. A truck full of red hot cheese puffs rolls over, leaving everyone on the road stuck in a spicy traffic jam. Once, there was even a publicity hungry band that rented an 18 wheel truck just to block traffic to throw a concert and make headlines for causing drivers a headache. This is all amusing, but recently a friend of mine told me about how he never thought his nasty slice would end up causing a similar problem.

I suppose you could say that the golf course is partly to blame; he was playing at a course near a freeway and though there was a net to help block stray balls, it wasn’t enough to shield poor freeway goers from the epic slice my friend could uncork. The ball sailed high in the air, making a sharp right and then bounced blithely onto the nearby freeway. Thankfully it didn’t hit anyone, but we heard a massive screeching of tires as motorists slammed on their brakes to avoid my friend’s golf shot. His response: “I think I should hit a provisional.”

I wasn’t able to listen to the afternoon traffic report that day (we still had seven holes after all), but I could picture the folks out there in their cars listening in to the traffic report, informed of a “sig-alert caused by a stray golf ball”.