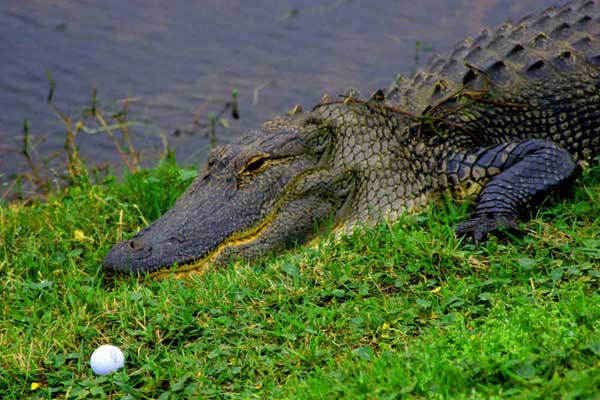 My wife’s family is from the South, and they’re also avid golfers, which means I have a good amount of experience playing down in Dixie. Usually I play in Virginia, which is relatively swampy, but nothing compared to the deep bogs of South Carolina, which I experienced during a vacation with my extended family. These dank swamps are full of all kinds of nasty critters, as a man I met while golfing there once found out after a particularly bad slice.

As I was finishing an 18 hole round on a costal course in South Carolina on a muggy day, there was a man in the clubhouse running around hysterically. It seems the guy was in a panic because of something that happened to him on the back nine. It was on a straight hole walled off by tall kudzu covered trees on the left and a weedy swamp on the left. Needless to say, there were plenty of mosquitoes on both sides. Despite his best efforts, he sliced, and his ball ended up in the impenetrable muck.

He could have just hit a provisional, but something told him to go digging for the ball. Fortunately for him, he ultimately found it. But out of nowhere, an alligator spotted him and began to charge. According to this guy, the gator nearly got him. He turned tail and ran, or at least tried to. His bag was still on, and in his panic a small ball-shaped training device fell out. Looking back, he saw that the gator had snapped up the training aid.

In his panic, he had told his friends to leave him out of the rest of the round. He didn’t want to risk another gator attack, and he would have to find himself another training aid.

As he told this, I realized something was odd about his voice: it was normal sounding, but by this time I had become accustomed to the twangy southern accents of the Carolinas. Turns out, this guy was a fellow Northerner. As I looked around, my Southern golf companions were snickering. Only dumb Yankees like us would be scared out of a good round of golf by something as trivial as a gator attack.