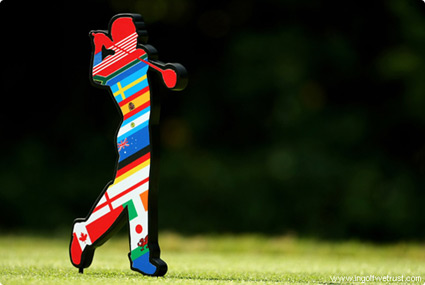 Golf is an international game, and each foreign language has its own particular take on golf terminology. Sure, many countries have imported the original English terms without translating them, but in other cases they put their own particular stamp on the golf lexicon. Which is good, because otherwise the golf lexicon of that country would be returned to sender – ha! Since we at Pause-N-Throw are always interested in curing a slice, we figured why not compile a list of names for slices in other languages.

In French, a slice is called crochet de droite – this has nothing to do with crochet, nor croquet, it literally means “right hook.” Sounds more like boxing, n’est-ce pas? Of course, you can always get by using the term “le slice.”

In Spanish, slicing in golf is known as efecto a la derecha, where “efecto” in this case refers to the spin of the ball. Though it has been known to have a negative effect on golfers’ tempers.

In most of the other European Languages, a slice referred to as a slice – no translation. For instance, in Germany, a slice is “Das slice”… sounds like something that would provoke Hitler into one of his badly subtitled rants on youtube.

Ditto for many Asian countries. However, the term has in many cases been adapted to the local parlance. Take Japanese: “slice” becomes “suricu”. As of yet, we haven’t been able to find the kanji character rendering of it.

Got a tip on how to say “Slice” in your own dialect? Let us know! That way we’ll be that much closer to fixing it!