Keep Stats to Find Your Weaknesses 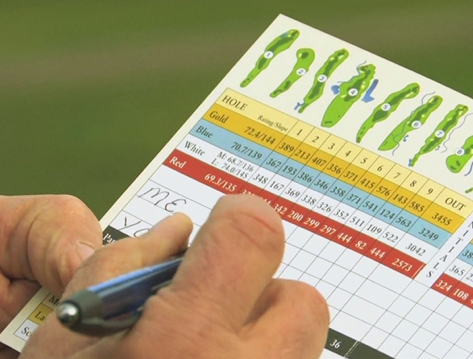 In golf, hitting fairways and greens in regulation is a big deal. Real Joe-pro golfers like to talk “greens in reg.” That means that on a par four you should be on the green in 2 shots — that’s hitting the green in reg. Or getting on in three on a par 5. If you do this you then have a birdie putt and a two putt for par.

Last year I began keeping track of the fairways I hit and greens in reg. What I found surprised me. I was doing fine off the tee. But I wasn’t hitting greens in reg. From some pathetic distance like 130 yards I was missing the green. Then I had to chip and putt for par. I’ve been using the Pause-N-Throw and it straightened me out. My greens in reg have improved.

Here’s how I keep my stats — On my score card, I put an F for fairway, then I think back through my round. I’m not completely literal about it. I put a check mark if I had a good drive on each hole, even if I’m in light rough. Then, I put a G for greens and put a check if I hit the greens. I then put a slash for each putt. So at the end of it all, I see that I might have hit 12/18 drives in play but only 9 of 18 greens in reg. Perhaps my ball striking is good but I three putted four times (gag, choke, vomit).