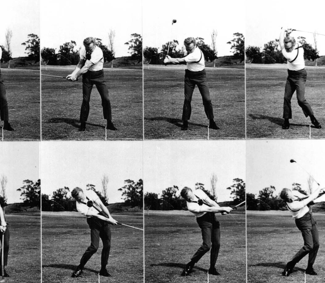 Golf technology is constantly changing. And the progress is even more impressive when you take a look back in time at how people use to play. Here’s a list of some of the most important breakthroughs in golf history.

For starters, the creation of metal shafts was a revolution in golf technology. For centuries, golfers used nothing but hickory shafts until the first metal shafts were phased in during the 1890s. Though expensive at first, advances in mass production ensured that prices dropped over time. Today, there are all kinds of shaft materials available. Naturally, modern golf shafts are a significant advance in golf tech and allow golfers to hit the ball much further.

Another important technological advance in golf is the golf ball. Originally, golf balls were little more than densely packed sacks of feathers. Eventually, they evolved into their current materials: a hard shell surrounding a bouncy rubber core. But perhaps the biggest breakthrough in golf ball technology is something few would expect: the dimple. Dimples make use of the ball’s spin to help it float in the air, adding significant distance to drives and other shots.

And finally, there are the breakthrough in the way golfers actually swing. One of the most important of these was made by Mike Austin, who wrote extensively on the golf swing. Austin focused on the idea that the clubhead should be accelerating as it hits the ball. HE also concentrated on the flat-wristed backswing, a concept which has been crucial in the creation of our own device, the Pause N Throw. The results of Austin’s breakthrough in golf tech speaks for itself: Austin used his swing to break the long drive record in tournament play.