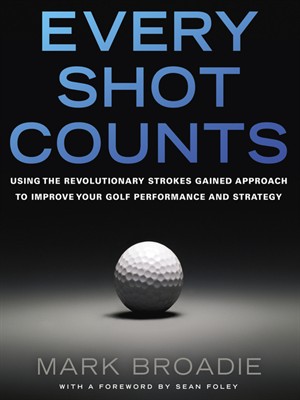 It’s the latest craze in golf books, but how will it help your golf game? Written by renowned business professor Mark Broadie, Every Shot Counts promises to answer the following questions (courtesy of the book’s Amazon blurb): “What does it take to drop ten strokes from your golf score? What part of Tiger Woods’ game makes him a winner?” How, you ask? Broadie purports to put his technical acumen to the test with the golf game. While traditional how-to books have been horsing around with hopelessly basic golf strategizing, Broadie brings the strategic acumen of a 3D chess game to the golf course, helping you to think your way to a lower score. Or so the story goes anyway.

When I found out Every Shot Counts was written by a business professor, I immediately thought of Moneyball, the revolutionary baseball strategy made famous in a movie with Brad Pitt. And, lo and behold, Broadie mentions Moneyball in the first few pages of the introduction, comparing it to his new “strokes gained” method:

“[The ‘strokes gained method’] for golf was similar to the approach that Bill James used in his sabermetrics revolution with baseball stats, popularized in the book and the movie Moneyball. In baseball, batting average had long been the main stat used to measure proﬁciency at the plate. James showed that another stat, on-base plus slugging percentage (OPS), was a better predictor of a batter’s contribution to runs scored, and therefore of a player’s value to his team.”

Strokes gained attempts to emulate this method. As Broadie explains it:

“Golf is, in effect, a dynamic program in which the objective is to minimize your golf score by making the best decision on each shot. This viewpoint leads naturally to the strokes gained performance measure, in which progress to the hole is measured, not in yards, but in the decrease in the average strokes to hole out.”

So there you have it: decrease the average strokes to the hole. But how? The method appears to apply especially to chips and putts. It’s essentially a new way to look at where you hit.

Naturally, you need to be able to calculate your target and have a reasonable expectation of hitting that target for this book to make any difference. To hit your target, you need to strike the ball accurately, something that the Pause-N-Throw golf training aid teaches you to do. If you slice every time, then your strokes gained will become strokes lost.

But even amateurs have claimed to have some results from Broadie’s book. Bottom line: it really is an innovative way to rethink golf strategy. But use the Pause-N-Throw golf training device first to make sure you have a solid base to build on before you put it to use.