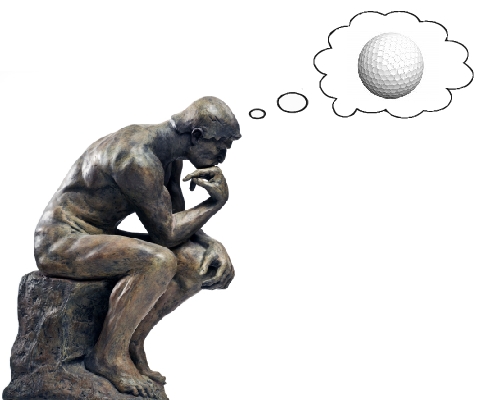 Golfers spend lots of time training their muscles, hoping to bulk up enough to simply crush the ball farther out there on the fairway. But instead of trying to turn themselves into Hulk Hogan, golfers would be better off in many cases training their minds. In many cases, being able to think clearly will help you to give your game a bit more finesse in difficult situations, such as putting or around the green. We at Pause-N-Throw once worked with a golf trainer known as the “Hammer Man of Golf”, who did emphasize bulking up but not at the expense of the mental golf game. He would bounce golf balls off hammers and then catch them on the head of the hammer, all the while shouting, “Slow the brain down, make that putt!”

The ability to concentrate will always be a key to good golf, and while many people realize this on a basic level, it’s difficult to pull off in the middle of a round. A website called Golf State Of Mind promotes the idea that, since many golfers talk about being “in the zone”, you should try to pinpoint that zone and be able to return to it. There are plenty of sites out there that have useful tips to use, so try to see what works best for you. Having a good mental game will give you the right touch that you need for tough shots, such as on narrow fairways or near greens.