Always Be Friends with the Starter 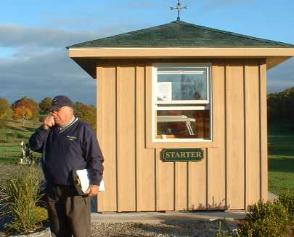 It’s a constant struggle for me to find a good time to play golf. By that I mean a time to play golf when no one else is playing. In my quest to get a good tee time, one thing that goes a long way is that I made friends with the starter at my local course, Recreation Park, in Long Beach, Calif.

His name is Hector and he is a tall young man with family on the east coast. He is, of course, a golfer himself, and every time I see him before a round I ask him how he’s been hitting the ball. He’s seen me wearing the Pause-N-Throw and he wants to try it himself. Late in the day, when the tee box is empty, he’s hit shots with it and is amazed at the result. With a big arc, he doesn’t have to swing hard to hit the ball a mile. The Pause-N-Throw has helped him control his shots and eliminate his swing.

It’s certainly not a quid pro quo relationship – I’m not expecting any special treatment as a direct result of our being friends. But it’s been helpful at times. He’s helped me get out ahead of tournaments and suggested times when it wouldn’t be very busy.

Bottom line: being friends with the starter isn’t going to automatically make you king of the course. But when you least expect it, it will come in handy. And of course, it never hurts to have one more friend you can talk golf with.